As Paddy Pimblett is the figurehead for the organisation in the area, several of his fellow Merseyside athletes are joining him in their rise up the sport.

His training partner Ben Petches-Kelly fought for the CW NWA amateur welterweight title as seen below.

On the other hand, Adam Wilson secured the biggest win of his career with a second round submission finish over Adam Malone.

Has this cemented his status as the next big thing out of the Liverpool MMA scene?

JJ from Southport went to a decision in his fight.

Fellow Southport fighter Liam Gittins was unsuccessful however, as he lost his first ever professional fight via decision.

There is no doubt many fighting out of Liverpool have a lasting future in the sport, starting with Paddy Pimblett who fights this Friday in London. 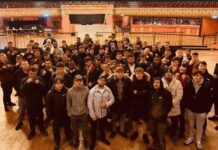