After creating a best Everton XI of the decade, we’ve decided to create our WORST XI made up of Everton players from over the past 10 years.

This list is generally based on talent, how they performed for the club and how much they cost.

It would’ve been harsh to put anybody in between the sticks in this XI, as the decade has been dominated by Tim Howard and Jordan Pickford, whilst both had respectable understudies in Joel Robles and Maarten Stekelenburg.

The former Slovakian international made just 10 appearances for The Toffees, but the fact he was on the receiving end of embarrassing cup exits to Brentford and Wigan in that time didn’t help his case.

He will be remembered for a magnificent display against Manchester City in a famous 2-0 win for The Blues in 2013 however, and rightly so.

Kicking off the defence is Cuco Martina, in an unfamiliar centre-back role. However, I’m sure he would’ve looked out of place anywhere on the field.

Martina came in on a free transfer in the summer of 2017 from Southampton, which still looks like bad business!

The Curacao international was mainly deployed as left-back due to injuries to Leighton Baines, but the 30-year-old was clearly out of his depth, owing to some woeful performances in blue.

Another free transfer in which Everton were still ripped off, Paraguayan defender Alcaraz tagged along with Roberto Martinez on his way to Goodison Park from Wigan in 2013.

Injuries limited the then 31-year-old to just seven lacklustre performances in his first season, with the real damage being done in his second.

A cataclysmic performance in the Ukraine helped Everton fall to a 5-2 romping at the hands of Dynamo Kiev in the Europa League in 2015, as Alcaraz departed that summer.

After five solid seasons in the top flight with Swansea, Ashley Williams’ £12m move to Everton looked like it had come too late for a 32-year-old.

His first season was solid enough, but the second was a full-blown calamity. The mistake-laden performances and defensive ineptitude was bad enough, but moments of madness against Lyon and Burnley – whilst wearing the captain’s armband – were unforgivable.

A real left field signing by Roberto Martinez in January 2014 looked like a masterstroke after viewing hours of Aiden McGeady compilations online, only to realise he was the very epitome of a ‘YouTube footballer’.

One goal, three assists and 32 disappointing Premier League games later spelled the end for the Irishman, who joined Sunderland in 2017.

It didn’t help the Dutchman’s case that Steve Walsh was on a warpath to sign attacking midfielders though, adding Klaassen to the homecoming of Wayne Rooney and club-record signing Gylfi Sigurðsson.

After just three Premier League starts, the £23.6m signing was sent packing to Werder Bremen, where he is still yet to light up the Bundesliga.

When the Frenchman signed for Everton in 2016, it looked like a very shrewd piece of business after some man of the match displays. Fast forward 12 months, and he was the brunt of all Evertonian’s frustration.

A tendency to pass backwards or sideways whenever on the ball, a consistency to give away daft free-kicks and pick up cheap red cards sees Schneiderlin enter the side after his £24m move from Manchester United.

Remarkably, this is the fifth player signed under the stewardship of Steve Walsh already in the XI.

After scoring just nine goals in three Premier League seasons, The Blues spent an absurd £25m on the then 27-year-old, bringing him from Crystal Palace.

An average start at Goodison was halted by a cruel ACL injury, ruling the DR Congo international out for over a year.

Upon returning, Bolasie disappointed in the final six months of the campaign, registering just a solitary goal in 16 games. He’s now on his third loan spell away from the club.

Another masterstroke by Steve Walsh was to bring in highly-rated Spanish striker Sandro from Malaga for just £5.25m.

This seemed like a fairly low-risk decision, until it was reported that the former Barcelona man was on a jaw-dropping £120k per-week.

In the three and a bit seasons since Sandro’s arrival, he’s been loaned back to Spain three times, played 60 games, scored two goals and earned a staggering £14.5m. He was a flop, to say the least.

‘The Straq’ arrived in 2011 on loan from Argentina as a relative unknown but left as a cult hero.

In terms of work rate, you would be hard pushed to find a man as dedicated to the cause or more willing to run through brick walls for his teammates.

In terms of talent, however, it wouldn’t be outlandish to say that Stracqualursi is the least naturally gifted footballer to ever play for Everton. He was a workhorse though and will be remembered at Everton for his love for the club.

Similarly to Stracqualursi, Niasse’s natural ability is questionable, whilst his work rate and effort isn’t.

Unfortunately for Niasse though, he cost a stunning £13.5m, meaning end product was required and not just a positive mentality.

The 29-year-old is still at Everton but hasn’t made an appearance for The Toffees since December last year. A miraculous brace against Bournemouth will always be remembered, but sadly Niasse was just never good enough. 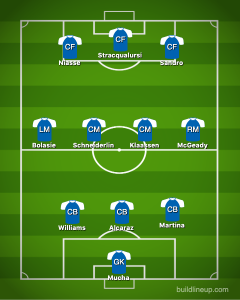