Wirral 2nd XV continued their unbeaten start to the season with a narrow 8-3 victory away at Birkenhead Park Wanderers.

The visitors are the only side in the division to still boast a 100% win record.

And a bonus point in each of those wins means they have claimed maximum points from their opening six games.

No losses today for all the Wirral teams playing. Great day for the club. pic.twitter.com/Kgit7bbEW0

They did not have to wait long for their first try either as a slick display of handling saw winger Evan Robinson dot down inside the opening two minutes.

Full-back Joshua Connolly was unable to add the extras, but it looked as though Wirral were going to continue with the form that saw them beat Glossop 33-8 last weekend.

The hosts, however, responded positively winning the first scrum of the game against the head before laying an onslaught of their own on the Wirral try line.

An excellent Wirral turnover prevented them from hitting back within minutes, but the Wanderers were showing no signs of a team that hadn’t played since October.

However, the host’s frustrations continued as they built phases just outside the Wirral 22 without any reward.

The two Cheshire-based sides struggled to take control of the lineout with throws being deemed not straight, time after time. 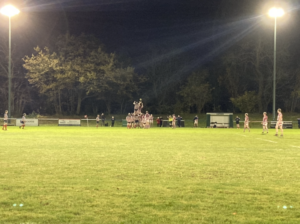 But, eventually the league leaders managed to string some passes together inside the Birkenhead 22 before Robinson passed up a golden opportunity to get his second try of the evening.

Having used their forwards well to create the space on the outside, the right-wing could not hold on to a looping miss pass that surely would’ve put the visitors two scores ahead.

However, advantage was still being played for a Birkenhead offside and Wirral opted for an easy shot at goal.

Connolly notched his only points of the evening to send his side in 8-0 up at half-time.

In the second half, Wanderers showed an intent to play even from deep in their own half but were prevented from gaining any real momentum by the excellent Wirral line speed.

Although, their efforts were eventually rewarded with a penalty just outside the Wirral 22 which scrum-half Jack Roberts slotted to put the hosts back in striking distance.

However, a sin bin almost immediately after followed by another one five minutes from time hindered Birkenhead’s chances considerably.

Despite this though they continued to show dominance in the scrum and might have felt they should have been awarded a penalty try after continuous pressure in the Wirral red zone.

But when the front row were penalised for not driving straight it all but confirmed defeat and Wirral closed out the game in the professional manner you would expect from table-toppers.

Park will be hoping they can fair better when they host Chester next weekend while Wirral will look to continue their winning run against Holmes Chapel.