Despite his lack of form this result, at the climax of the European Tour season, sees Fleetwood finish a respectable 15th in the DP World Tour Rankings.

The ranking puts him above the likes of Rory McIlroy and Justin Rose but mainly because the European stalwarts play the majority of their events on the PGA Tour – a tour which Fleetwood agonisingly lost his card for back in September as a result of his indifferent form.

Just two top-10 finishes in 18 starts in the States last season means that Fleetwood will now have to rely on invitations to play in some of golf’s biggest events.

He did however take part in arguably the biggest of them all back in September, The Ryder Cup.

Fleetwood’s one point from three matches was relatively acceptable given the 19-9 demolition that Europe sustained.

However, contrast that with 2018 where Fleetwood was one half of the first ever pairing to win all four of their matches on route to a 17.5-10.5 victory and the difference could not be more stark.

Fleetwood’s ability to thrive on the game’s biggest stages helped catapult him into the world’s top ten.

At the 2018 US Open, Fleetwood became just is the sixth golfer in history to shoot a round of 63 which led him to occupying second place on his own – just one shot behind winner Brooks Koepka.

When Fleetwood followed this up with another second-placed finish at the 2019 Open Championship it showed that the five-time European Tour winner felt an element of comfortability on the world stage.

It is this comfortability that has eluded him this year however with a T33 finish at the Open the best he could manage across the four majors.

The biggest factor in this drop-off has undoubtedly been the driver.

Previously such a strength of his game finishing in the top 15 for strokes gained/off the tee on the PGA Tour, in three consecutive seasons, Fleetwood fell to T-145 in 2021.

It is, however, by no means a crisis.

This is nothing to be sniffed at, especially when you compare it to the man with whom he dominated the 2018 Ryder Cup with; Francesco Molinari now finds himself 214th in the OWGR having missed eight cuts in 2021.

In addition, Fleetwood’s form had certainly started to pick up as the season neared its conclusion.

The Southport star came to the Earth Course off the back of four consecutive top 15 finishes and can be satisfied with his performance on a course that provides a truly unique set of challenges.

Fleetwood’s performances this season might not have lived up to expectations but that is only because of the very high standard he has already set.

At the age of 30, Fleetwood is entering his golfing prime and if he can have an underwhelming season and still finish 15th in the DP World Tour Rankings then one can only wonder what he will achieve when he is playing at his best.

Eyes on the prize for Southport’s Tommy Fleetwood in Dubai 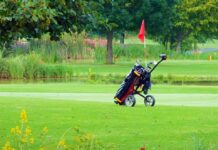 Mark Steers interview – “I think I caddied in the best times”