As the decade draws to its conclusion, MerseySportLive has been taking a look at the best and worst XIs of Merseyside’s biggest football teams and now, it’s Tranmere’s turn.

Here, we have chosen what we consider to be the best eleven players to have featured for Tranmere Rovers over the last ten years.

As always, this list only includes players to have represented the club since January 1st, 2010, until now and is based on their achievements this decade.

Signed from Fleetwood in 2015 as a replacement for the departing Owain Fôn Williams, the Lancashire-born shot stopper signed a new contract in the summer, keeping him at the club until 2022.

Jamaica’s most capped player of all time, slots perfectly into our squad at right-back.

The only player to play for Tranmere whilst in his forties, Goodison made over 400 appearances for the Super Whites during a ten-year spell at Prenton Park.

He may not look like the most flamboyant defender but Steve McNulty has oozed class his entire career.

A record of six promotions with four clubs speaks for itself, with the most recent coming at Wembley in May as he captained Tranmere to play-off glory against Newport.

Born in Bromborough, Wirral, Taylor joined Rovers aged ten and went on to make nearly 200 appearances in blue and white.

The 29-year-old now plies his trade in Scotland with Aberdeen.

It is fair to say Zoumana ‘Back of the Echo’ Bakayogo has had rather an odd career.

Having progressed through the ranks at PSG, the former Ivory Coast youth international joined then-League One side Millwall in 2006 before becoming somewhat of a fan favourite during two spells with Tranmere.

The 33-year-old joined National League side Notts County in the summer.

Connor Jennings deserves a statue outside Prenton Park for his contribution to Tranmere’s turnaround over the last three years.

Signed in 2016 from National League rivals Wrexham, the Mancunian’s stunning finish in their first of three successive Wembley play-off finals was not enough to propel them into the Football League.

However, Tranmere made their triumphant return to League Two the following season thanks to a James Norwood header. Assisted by Jennings, of course.

If that wasn’t enough, the 28-year-old also scored the only goal in the League Two play-off final last season, giving him a record of two goals and an assist from four games at Wembley.

Tough-tackling, reliability, consistency – they might not be the most glamourous characteristics, but any successful team needs them – and John Welsh had an abundance of all three.

Signed from Hull City in 2009, Welsh was an ever-present for Tranmere at the start of the decade, making over 130 appearances in three seasons before signing for Preston North End in 2012.

The extraordinarily named Max Power earnt plenty of plaudits for his tenacity and creativity when he burst onto the scene in 2011.

Unsurprisingly then, the academy graduate left Tranmere after their relegation to the Conference, joining then-League One side Wigan Athletic before making the switch to Sunderland in 2018.

Admittedly, Jason Koumas’ best years were behind him by the time he returned to Tranmere for a second spell in 2013, but the ex-Welsh international is regarded as a legend in Birkenhead.

Relentlessly compared to former Liverpool youth teammate Steven Gerrard, Koumas is perhaps remembered more for his perceived ‘waste of talent’ than his performances for the Super Whites at the turn of the century.

Nevertheless, he scored four goals and provided four assists in his first season back on Merseyside despite the club suffering relegation to the fourth tier.

Despite his controversial move to League One rivals Ipswich in the summer, James Norwood should go down in Tranmere Rovers folklore.

His aforementioned Wembley winner sent the club back to the Football League after three arduous seasons in the National League.

Not only that, his record of 32 goals in all competitions last season were matched only by Sergio Aguero in English football, a record that will remain unparalleled for years to come.

Norwood’s prolific strike partner only played two seasons for Rovers, but he finished as the club’s top scorer on both occasions and won the National League Golden Boot for the latter.

Just as Norwood did, however, Cook left the club for League One after scoring in a play-off final and now plays for Mansfield Town in the division below. 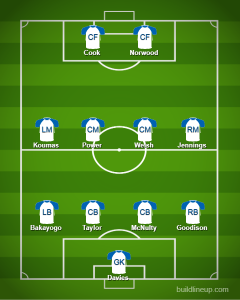 Battle of the attacking trios