With Carlo Ancelotti set to be announced as the new Everton manager, we’ve taken a look back at the best players Ancelotti has managed to try and create the best possible XI.

This list is based solely on whether players were managed by Ancelotti, not necessarily how they performed whilst under his tutelage.

In between the sticks is footballing legend Iker Casillas, who captained Ancelotti’s Real Madrid side to their 10th Champions League title in 2014.

Casillas was part of the FIFA Pro World XI for five consecutive seasons between 2008 and 2012, whilst also captaining Spain to a World Cup and two European Championship titles.

Next up is perhaps football’s greatest ever right-back; Brazil legend Cafu. ‘Il Pendolino’ or ‘The Express Train’ was managed by Ancelotti from 2003-2008 during Cafu’s legendary spell at AC Milan.

Pairing alongside Cafu, not for the first time, is fellow Milan stalwart Allesandro Nesta.

A three time Serie A winner, Nesta was brought to The Rossoneri by Ancelotti in 2002 for €30m from Lazio, spending the next 10 years in Milan and cementing legendary status amongst some of the club’s greats.

Joining Nesta in the heart of our defence is Chelsea legend John Terry, who was managed by a host of superstar managers at Chelsea – including Ancelotti.

Completing our back four is perhaps football’s greatest all-time defender in Paolo Maldini, who joins two other Rossoneri defenders in the backline.

Maldini spent eight of his 25-years at Milan under the tutelage of the Italian, winning two of his five Champions League titles in that time, becoming the then oldest player to play in a Champions League final in 2007 as well.

Deployed in his favoured role of a deep-lying playmaker, Pirlo is modern football’s greatest exponent of the art. Whilst playing under Ancelotti, Pirlo revolutionised the position, and become one of football’s most respected players as he flourished in Carletto’s system.

Like his Milan teammates before him, Pirlo was a two-time Champions League winner under Carlo, before playing a similar role in the great Juventus sides of the 2010’s.

Pirlo was still pulling the strings in the Bianconeri midfield at the age of 36, with Ancelotti’s use of the midfielder saving his legs, allowing him to play at the elite level in his later years.

As tempting as it was to shoehorn Frank Lampard in on the right flank, it was equally as hard to avoid putting Kaka in, albeit slightly out of position for the pair of them.

It was Kaka’s 2007 Ballon d’Or win that edged it in the end, with the Brazilian pipping Lionel Messi and Cristiano Ronaldo to the award.

Earlier that year, Kaka produced an El Phenomenon esque display at Old Trafford in the Champions League semi-final, resulting in one of the competitions greatest ever goals.

The second Real Madrid inclusion from the memorable La Decima season is of course Cristiano Ronaldo, who worked under Ancelotti for two years between 2013 and 2015.

Ronaldo scored 105 goals in just 85 games under Ancelotti, including one in the aforementioned 2014 Champions League final which clinched Madrid an elusive 10th Champions League after a 12-year wait.

Certainly not the most controversial appointment at number 10 we’ve seen this year, as Zinedine Zidane edges it over Ronaldinho due to the longevity of his career.

Zidane was masterful under Ancelotti at Juventus between 1999 and 2001, before sealing a world-record £46.6m move to Real Madrid that same summer.

Zidane went on to eclipse his former coach, becoming the second manager to win three Champions League trophies, and the first to do it consecutively.

Whilst ‘Original Ronaldo’ was a faded force by the time him and Ancelotti linked up in 2006, it would be blasphemous not to include perhaps the finest footballer of his generation in our XI.

Ronaldo bagged nine goals in 20 games despite not actually owning a pair of knees at the time, before bowing out of European football in 2008. Perhaps the greatest player in this team, but certainly the least effective under the Italian.

Whilst it was hard to leave Thierry Henry or Didier Drogba out of our side, Zlatan’s relationship with Ancelotti could be revived in the modern day, with Everton linked heavily with the 38-year-old Swede, which gives him the edge here.

Ibrahimovic’s goal record under Ancelotti at Paris Saint-Germain speaks for itself, with the goal-machine bagging 35 times in 43 games under Ancelotti during their brief spell together during the 2012/13 season.

Between our strike force, the pair have scored 990 goals, won 14 league titles, 20 domestic cups, five European trophies and two international tournaments – but not a single Champions League between them. 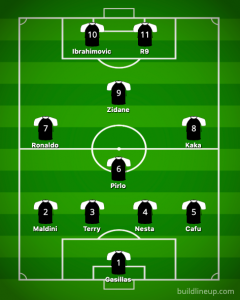 Our bench includes some of the players who, in their peak, would probably walk into any side in world football now, but will have to make do outside our starting XI.

It’s a squad game, after all.