Over 16 months on from UFC 228 and with Darren Till’s career back on track, MerseySportLive recollected on his Darren Till’s walkout in Texas when he became the first Liverpool MMA fighter to fight for a UFC title.

Although unsuccessful, the event remains a beacon in Liverpool combat history.

You can watch his UFC Liverpool walkout here.

You can watch his UFC London walkout here.

You can watch his UFC 244 walkout here. 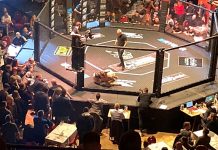 The impact of Shinobi and CWA North West