American Football’s popularity in Britain is continuously growing each year.

Whilst its English acclaim began in the 1980’s on Channel 4, the sport has tried and failed multiple times to successfully harness an English audience.

But now with the country hosting their own annual NFL fixtures, talk of its own Franchise and its own BBC One programme, American Football this side of the Atlantic is really starting to bed into British sporting culture.

It’s not just watching it, however. Whilst time zones are the main problem for Brits wanting to engage in the sport, there is no such problem when it comes to playing it.

The sport is no longer tossed onto a pile of Americana that failed to translate from over the pond like Diners, Howard Johnson’s or baseball – it’s at the forefront of people’s minds.

I spoke to Thomas Marrs, a University of Liverpool student who was firmly involved in the University’s American Football team, and someone who found the sport very competitive.

“There’s a lot of people wanting to try out and play.” The 20-year-old said.

“For my position of running back, we had six or seven people trying out and only two of us got selected to join the existing four.

“There must’ve been close to 90 people trying out. It’s incredibly competitive.”

It should come as no shock that the sport is gaining so many willing suitors, however.

It’s a game for people of all shapes and sizes to chance their arm at, but why is the sport becoming so popular?

“I think the popularity comes from a few different avenues.

“It’s a culmination of NFL vintage clothing becoming more fashionable, the pop culture and a lot of transnational scouting.

“It’s also the NFL’s attempt to push games annually into Europe with games in London for example.”

As many as 81 American Football teams competed under the BUSC umbrella for college and universities in 2018, signalling the popularity of the sport with teams competing in their corresponding regional leagues across the country.

Whilst on a professional level, four NFL fixtures were played in London last year at both Wembley Stadium and The New Tottenham Hotspur Stadium compared to three in 2018.

One potential drawback however is the cost of the equipment and clothing, but it doesn’t seem to have deterred many.

“I paid a deposit firstly of £85 for the helmet and pads.” The Wirral native said.

“You then return them at the end of the season, for the rest you pay for what you get and it’s around 200-300 pound in total.

“It’s not too bad if you’re head strong and committed to the sport – that’s the kind of player American Football needs to be successful in Britain.”

Local Liverpool bars are now showing live American Football as part of their offering, as well as the city boasting its own semi-professional team in the shape of the Merseyside Nighthawks, with plenty of players playing for both the Nighthawks and the Raptors.

The sport appears to have captivated a large enough audience to suggest it is now becoming widely popular in Britain, with the promise of more growth in the future as the game continues its progression on our shores.

If you want to get into the sport yourself, here is an excellent starting point. 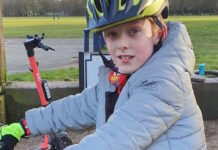