Southport golf star Tommy Fleetwood showed glimpses of his best at the PGA  Championships, despite falling away on the final day.

The 29-year-old ended the tournament at Wentworth in 15th on  9 under par, carding a disappointing 73 in the last round.

But Fleetwood admits he is feeling much happier about his game in comparison to his last competition out in America.

Fleetwood told Sky Sports he was struggling a few months ago but has since been working hard and feeling the benefits.

“I feel like my game has progressing really, really well and I am playing some really good stuff.”

Although the Merseyside man did not manage to break into the top 10 on the final day of the tournament, the five time European Tour winner showed his class with some very impressive birdies in the latter stages, helped along by his ever sensational iron play.

Fleetwood will welcome an improvement to his form as he prepares for the delayed 2020 Masters in Augusta in November.

A solid performance from Fleetwood at the PGA and finishing runner up at the Scottish open a week ago are good signs going forward.

Fleetwood is likely to stay in the world’s top 20 as he heads to Augusta. 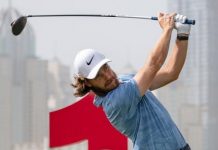