Lancashire Cricket Club pair Jos Buttler and Liam Livingstone are set to feature for England as the five-match Twenty20 International series against India gets underway on Friday at Ahmedabad.

Multi-format player Buttler was rested for the last three matches of the test series against India and returns to the bio-secure bubble for the white-ball series.

The explosive wicketkeeper-batsmen is an integral part of England’s T20 side and will likely open the batting with Jason Roy. He is also expected to take the gloves for the series.

England’s rotation policy this winter has come under a lot of criticism.

Buttler believes he has benefited from a break and says that the policy will be important to ensuring that the players are in good condition for the T20 World Cup and the Ashes later in the year.

Speaking to Sky Sports Cricket, Buttler said; “We’d rather prevent problems than react to them”.

“The ECB and the players have worked closely on that and I think we need to get away from the idea that you just go until you break and then we leave players behind.”

“There is so much cricket coming up, there’s that huge carrot of the Ashes at the end of the year and you need to be getting to the point with players in the best shape to go and perform in that series, as opposed to be burnt out and no longer wanting to be in that environment.

Lancashire top-order batsmen Livingstone has been recalled for this series, following excellent form in franchise cricket around the world.

Livingstone hasn’t featured for England since 2017 where he made two appearances against South Africa, but failed to impress, scoring 16 and 0.

The 27-year-old, told reporters on Wednesday that he hopes to get the chance to showcase how much he has improved since 2017.

“For the first time in my career, I feel like I belong in this environment, and it’s nice to be back.”

“Ultimately looking back, it was a really steep learning curve for me and I guess it probably did me some good in the next couple of years.”

“It gave me a kick up the backside and made me work harder.”

Buttler and Livingstone will also play together for the Manchester Originals in the inaugral Hundred tournament, that takes place this summer.

The five-match International T20 series between India and England gets underway tomorrow at 13:30 GMT in Ahmedabad, live on Sky Sports. 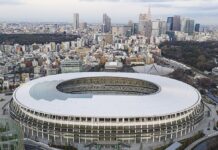