The Rugby Football League have confirmed that the Betfred Women’s Super League will return on April 18 after a year and a half of absence.

The St Helens Saints, Warrington Wolves and Wigan Warriors will be among the ten teams aiming for a place in October’s Grand Final, with Warrington one of the two central venues who will host the first ten games.

“It has been a long wait, but this will be worth waiting for,” said Thomas Brindle, General Manager of the BWSL.

“2021 is such a huge year for Women’s Rugby League in this country, with a home World Cup to anticipate, it is essential for the Betfred Women’s Super League to resume.”

St Helens Saints and Wigan Warriors will be looking to better their 2019 results, which saw both teams make it to the play-off semi finals and finish 2nd and 4th respectively behind winners Leeds Rhinos.

Wigan were victorious in 2018 so could be serious contenders for the title, but with three different winners in three years, it’s all up for grabs.

⏪ To celebrate the return of the @Betfred Women's Super League, we rewind to the 2019 Grand Final – the first to be televised live on @SkySports – between @CTRLFCWomen and @leedsrhinos…

The Women’s Super League was launched in 2017 as a four-club tournament and is the only elite women’s rugby league club competition in England.

It has been steadily expanding since then, with 2021 the first time that ten teams will feature in the competition.

After the Covid-19 pandemic curtailed almost the entire women’s rugby league season in 2020, the growing league’s momentum was interrupted, but new additions Huddersfield and Warrington will finally join the competition next month.

“We were excited about our expansion to 10 clubs, and I know that both Huddersfield and Warrington will be especially keen to get going after having to wait 12 months longer than they planned or expected,” said Brindle.

The early rounds will be played behind closed doors, but after Castleford Tigers achieved a  record attendance in 2019, there is hope that fans will return to stadia before the season is over. 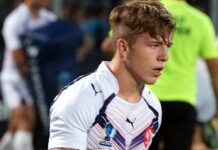