To kick things off in Dublin, Merseyside’s Dave Chisnall took on three time BDO world champion Glen Durrant, in the semi-final of the World Grand Prix of Darts.

The first set was as straightforward as ‘Chizzy’ could have hoped for. The St Helens man rattled off three legs in the blink of an eye to put himself 1-0 up in the first semi-final of the evening. He did not miss a dart at double in the opening set, as well as hitting two maximums.

Durrant won his first leg of the match in the second set, before checking out a spectacular 154 to double his lead in the set. ‘Duzza’ then checked out 87 to win the second set. It was the complete reverse of the first, as Durrant whitewashed Chisnall to level the match at 1 set a piece.

Durrant then started the third set as he finished the second, winning his fourth leg in a row and putting himself 1-0 up. In the second leg however, Chisnall checked out a stupendous 170 finish to level it up. It was the third ‘big fish’ of the tournament, as world number one Michael Van Gerwen and Mervyn King both checked it out on quarter-finals night.

It's three 170's in two days here in Dublin as Chisnall reels in the big fish to stop the rot! ? pic.twitter.com/LeFB5nqpOG

The third set went to a deciding leg, and it was the Merseyside man who took it with an impressive 52 finish on double 18.

The fourth set got off to a cagey start, as both players missed doubles which they would’ve expected themselves to easily check out. The Middlesbrough man got a grip of the set, as he took out tops to give himself a 2-1 lead. The 39-year-old however clawed the set back to level as he checked out an impressive 140 on double ten. The set went the way of the St Helens man as he hit double four at the first time of asking to put himself one set away from a place in the final.

Chisnall won two quick-fire legs at the beginning of the fifth set, to put himself only one leg away from victory and a place in the World Grand Prix Final. Durrant had different things on his mind however as he checked out a 112 to keep himself in the match. He then levelled the set up at 2-2, forcing Chisnall to hold throw in the final leg. ‘Chizzy’ held his nerve and ran out a 4-1 winner in the end.

CHISNALL IS INTO THE FINAL!

Chisnall will be hoping to replicate this form in tomorrow nights final, where he will take on either world number one, Mchael Van Gerwen, or Chris Dobey. 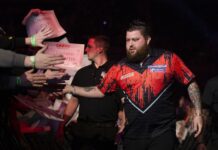 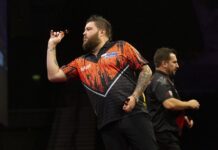