Fleetwood has played only three times so far in 2020, notably finishing 2nd at the prestigious HSBC Abu Dhabi Championship back in January. 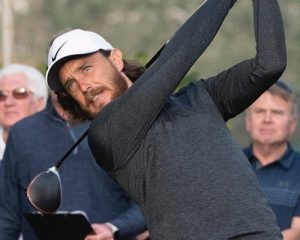 Being one of the most consistent performers across both tours, Fleetwood has been comfortably inside the world’s top 20 since 2017.

The 29-year-old is yet to win on the PGA Tour but has been agonisingly close.

Fleetwood has finished second four times; a runner up to Dustin Johnson at the WGC Mexico in 2017, and second alongside Sergio Garcia in the tours’ only pairs competition – the Zurich Classic of New Orleans in 2019.

Having the profile of a Major Championship contender, Fleetwood has been close to breaking his maiden on both sides of the Atlantic.

In the 2018 U.S Open at Shinnecock Hills, Tommy was the closest pursuer of the rampant American, Brooks Koepka. Shooting a 78 (8 over par) on day three, Fleetwood rallied with a tournament low 63 on Sunday to push the now four-time major champion the whole way.

Continuing his marvellous major form into 2019, Fleetwood was second to Shane Lowry in The Open Championship at Royal Portrush.

Lowry was magnificent on home soil winning with a score of -15.

Fleetwood was only four shots behind after 54 holes but finished on Sunday with a 1-over-par 74 to achieve solo second, 6 shots behind the Irishman.

Olympic Golf Champion, Justin Rose, has set the standard for English players in rankings since 2012. Rose joined the golfing elite in 2013, when winning the U.S Open at Merion.

In the nine years since, Rose has only slipped out of the world’s top 10 rankings only once. Remarkably it was in his Golf Medal winning year where he fell to 16th, yet still qualifying to play on Europe’s Ryder Cup team.

A unique, identifiable finish to his swing, Fleetwood’s strongest assets is his ball striking.

As well as being an elite ball striker, Fleetwood has a fantastic short game.

Scrambling is a stat that is a measurement to work out how good a player’s short game is. It is a chip or a putt from less than 50 yards away that results in requiring one putt or less on the green. The stat is generated by dividing successful scrambles by number of greens missed.

Effectively it is a player’s ability to get up and down.

A combination of his terrific, dependable play and meticulous schedule plans between the two tours, Tommy has given himself the opportunity to gather as many World Ranking Points elevate his status as one of the World’s best golfers.