Cheshire Phoenix made it three wins on the trot after guard Mike McCall scored a tremendous late three that saw off the Flyers in a 71-69 Phoenix win.

After back-to-back decisive wins against the Manchester Giants and Hemel Storm, in the BBL Trophy, Phoenix continued their excellent form with a hard fought victory over the Bristol Flyers in a must-win game between two sides battling for the final playoff seed.

Cheshire hit the ground running fast with an 18-10 scoring run in the first quarter, registering a high stat line in field goals made with a percentage of 53% in comparison to Bristol’s lackluster 18% as well as remaining a dominant force off the glass with a total of 12 rebounds (11 Defensive).

By half-time, Phoenix was up 38-24 but had trouble converting their free throws with only one of their four attempted free throws finding the bottom of the bucket.

Both teams remained active in the hustle department with a high number of blocks, steals and rebounds as well as looking more impressive in the passing lanes with ten assists being shared across both teams.

Phoenix started the third quarter off brightly and enjoyed the biggest lead of the game up 24 points before a late Flyers comeback cut the lead back down to 15 points.

The visitors continued to show their excellent scoring ability and scored a respectable shooting percentage from the field with a 56% FGP and 61% from two point range.

Going into the fourth quarter, it seemed that Cheshire would comfortably see off the competition with another decisive victory, yet the hosts soon hit back setting up a climactic finale.

Bristol cut the Cheshire lead back to single digits before tying the game at 66-66 with only seconds remaining. Cheshire would respond with a two point play before Bristol guard Ben Mockford scored a three with only four seconds remaining on the clock, putting Bristol up 69-68, forcing a Cheshire timeout.

After a quick discussion, Cheshire threw the ball back into play and knew that it had to be now or never to secure a vital victory over one of their closest play-off rivals.

After finding space, Cheshire guard Mike McCall attempted a step back jump shot from beyond the arc. Despite the shot being highly contested and McCall almost looking off balance upon his release, his shot found the bottom of the bucket which was met with a raucous reaction from the Cheshire bench.

It was a truly remarkable buzzer-beater with this being the only shot that Cheshire converted from three point range all quarter after missing all of their first five shots, from which Bristol converted five of their eight attempted three point field goals.

Cheshire returns to action on Sunday with a 5:00 pm home tip-off against the Glasgow Rocks in

their BBL Trophy Quarter-Final tie. The Rocks are currently struggling for form with back-to-back league losses against the Leicester Raiders and the Sheffield Sharks. 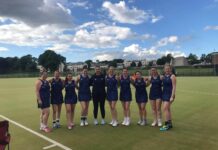 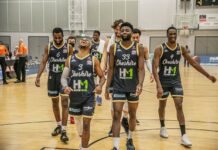