Liverpool tennis player Neal Skupski is out of the Australian Open after defeat in the Mixed Doubles quarterfinals.

Skupski linked up with the Slovenian Andreja Klepac after he and his brother Ken were knocked out of the Men’s Doubles in the second round.

They battled through the first two rounds in three sets but Londoner Joe Salisbury and his American partner Desirae Krawczyk proved too strong.

Salisbury and Krawcyzk eased to a routine 6-3 6-4 victory in seventy minutes, securing a single, decisive break of serve in each set.

Skupski has not progressed beyond the last eight of a Grand Slam since the 2019 US Open.

They are set to meet on Friday for a place in the Men’s Doubles final. 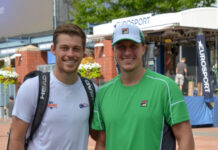 Skupski brothers crash out in Round 2 of Australian Open