It’s been a long-debated topic.

Is the English top-flight the world’s leading football league?

We need to look at THREE key areas to judge this:

Arguably, the most important of these from a fan standpoint is how competitive the league is.

Nobody wants to watch a one team league every season.

Frankly, it gets boring.

The Premier League is regarded as one of the hardest leagues to win in the world.

There have been five different league champions since the 11-12 season.

This is the most diverse out of the Top five leagues in Europe – Premier League, La Liga, Serie A, Bundesliga and Ligue 1.

This is in accordance with the UEFA club association clubs co-efficient.

The last time a team not one of the traditional ‘Big Six’ won the title was in 2015-16 when Leicester did the unthinkable.

Compare this to the second ranked league on UEFA’s list, La Liga in Spain.

They have had three winners in the last 10 seasons – Atletico Madrid, Real Madrid and Barcelona.

Both Manchester City and Barcelona have won their respective league five times in the last 10 seasons, this does imply some level of dominance or one-sidedness.

Both sides have never managed more than two titles back-to-back in that timeframe.

The same cannot be said for the other three leagues.

Juventus and Bayern Munich have both won their leagues nine times in a row in the last 10 seasons and PSG have won seven of their last 10.

This indicates a gulf in class in those leagues, with only Ligue 1 (4) having more than two winners in the last 10 seasons.

So, when looking at competitiveness between the Premier League and La Liga, they seem similar.

This is with the exception of higher diversity of winners in the English division.

Europe’s premier competition, the Champions League, has had six different winners in the last 10 seasons.

La Liga and Real Madrid have dominated that statistic with four for Real and one for Barcelona.

Three titles have been won by two English sides, Chelsea (2) and Liverpool (1).

The other two CL titles were won by Bayern Munich.

No Italian side has won the Champions League since 2009-10 when Jose Mourinho’s Inter Milan did.

There appears to be a clear gulf between those two leagues and La Liga and the Premier League.

The second tier of European football, the Europa League, is heavily dominated by Spain as well.

Seven of the last 10 titles are Spanish, with Sevilla winning it four times.

England hold the other three titles through Chelsea (2) and Manchester United (1).

A French side has never won the Europa League going all the way back into the 60s and 70s.

The Spanish domination at this level makes a great case for them being the best league in the world on trophies won.

But that is not the only deciding factor.

A list voted for by fans to decide the top 50 players in the world was released recently.

It has some of the biggest names in football and can indicate the level of quality in each respective league.

This can be a good way to gauge where each league is at, as with better opposition comes more competitiveness.

For example, a team full of the best players in the world will dominate in a league with not much quality opposition.

Of the Top 50 best players in the world right now, 22 are playing in England.

Spain is next closest with nine.

Ligue 1 contains eight and the Bundesliga and Serie A contain three and six respectively.

As mentioned before with higher class opposition comes more competition for trophies and just in general play.

The quality of football played by these players will be more entertaining and that is another factor to be considered.

Other factors could be looked at in this debate – Ballon D’or winners, money made by leagues, closeness of title races etc.

It does, however, include some of the more clear-cut arguments for which league is best.

It comes down to personal preference, as well.

And that’s the beauty of football – it divides opinion. 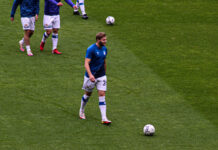 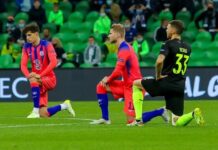 WHY we should ban footballers from social media