Tranmere Rovers manager Micky Mellon says he will put sentiment to one side ahead of Saturday’s trip to Fleetwood Town.

Mellon managed Fleetwood for four years from 2008 to 2012, guiding the Cod Army from the part-time football in the National League North to League Two before he was sacked in December 2012.

He takes his Tranmere side to Highbury following a 2-1 win at top-of-the-table Wycombe Wanderers after extra time in the FA Cup in midweek and is looking forward to the challenge against his former club.

“It was a time in my managerial career where I made so many friends and had such a wonderful time,” said Mellon.

“To enjoy the moments we did as a team and as people from top to bottom was fantastic and it’ll stay with us forever.

“It was an incredible time for all of us but I’m at Tranmere now and I need to make sure that my players are ready.

“Of course I respect the club and the terrific job Joey [Barton] has done, but it’s another challenge for Tranmere, something we’re really looking forward to.

“I know a lot of people there really well and it will be good to see them all and great to compete against them.

“I’m an experienced manager now and you have to keep your focus on the job at hand rather than the people you’re competing against.”

Tranmere sit three points clear of League One’s bottom three, but Mellon is encouraged by his side’s performances in recent weeks and the 47-year-old has challenged his side to keep improving ahead of the upcoming busy festive period.

“We have to keep improving all the time,” Mellon added.

“There’s areas that we absolutely have to get much better at, but there’s areas we’re happy with.

“We knew it would be a suck and see kind of season, but we knew that we had to keep improving moving up a level.

“It’s about keeping that consistency regardless of what happened on Wednesday and making sure we’re ready for the next challenge and that’s Fleetwood.

“That’s absolutely where our mentality is at the moment, we can look no further than that, but we can definitely see huge strives forward in development.”

“I think anyone who watches us on a regular basis will enjoy watching players develop and human beings develop.

“That’s what development is all about. We’re giving people time, patience and the right advice to help them improve and that’s exactly what we’re doing.” 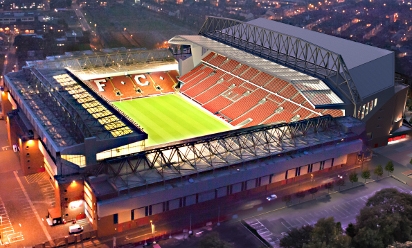 Dave Powell on Anfield Road expansion: “It’s all about demand for tickets”

What is the Parklife Project? Liverpool’s grassroots football campaign.

Jonny May and Jack Nowell fit for Semi-final clash