Liverpool boxer James Metcalf was disappointed that his fight on Friday night at the Grand Central Hall didn’t go beyond the first round.

A matter of seconds into the bout, Metcalf dropped stand-in opponent Jan Balog with a strong right hand – a blow the Czech national failed to recover from.

The referee called time on the fight as Balog struggled to lift himself from the canvas, handing Metcalf victory on a successful night for Merseyside boxers.

Despite the devastating TKO, Metcalf deemed the evening a largely disappointing affair.

“I had an operation four, five months ago and I wanted to test that out, see how it was and that,” he explained.

“But I didn’t even get to throw it, so a bit frustrated.”

The 31-year-old admitted that he expected to win the fight, but the sheer lack of time in the ring made it a forgettable evening in his opinion.

“Do you know I wouldn’t even rank it with my wins, it was just a routine win and it’s something I should’ve done.”

“I just hoped it would’ve gone on a bit longer and maybe got to test my hand out, but it never happened.”

Victory for Metacalf sees his record improve to 21-0-0, but he believes the first round stoppage of Balog is up there with his fastest in professional boxing.

“Yeah, it probably is, yeah, it might even be the quickest.”

“I was meant to be fighting a Mexican kid who might’ve given me a few rounds but he pulled out last minute so he’s (Balog) been brought in.”

“He went the distance with a couple of good kids but it didn’t happen tonight.”

Prior to Friday, Metcalf had been out of the ring since his TKO victory over Jason Welborn in June 2019.

But after such a short-lived bout against Balog, Metcalf will be seeking a greater challenge in the near future, though he was coy when asked about his plans for the year.

“I’ve got plans yeah, but I’m sure MTK and Frank Warren will have something planned for me and [I’ll] hopefully have a good year this year.”

Check out the full interview with James Metcalf below. 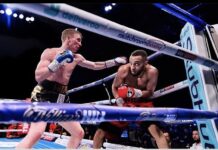