Despite going +2 on the final day, he held off competition from Marc Leishmann and Im Sung-Jae to finsh on -4 which was enough to win the Bay Hill event.

Interestingly, there were 44 players under par after Thursday’s first round but only four by the end of the tournament.

Saturday’s scoring average of 75.91 was the highest of any round at Bay Hill since 1983 – with only one player under par.

Speaking after the win, Hatton said:

“It’s an incredible feeling to win at such an iconic venue,” said Hatton, who was playing in only his second tournament since wrist surgery.

“I grew up watching this event on TV; to be sitting here with the trophy is amazing.” Hatton duly described his caddie, Scotsman Michael Donaghy, as a “national treasure”.

Tyrrell Hatton has long shown his support for Jurgen Klopp’s side, even sporting a tribute to Liverpool’s Champions League success on his wedge in the US Open last year.

Liverpool legend Sir Kenny Dalglish congratulated Hatton on his success, saying he looks forward to seeing him at Anfield in the near future.

Congratulations to Tyrell Hatton on winning the [email protected] Invitational from all the golf fans at LFC. Fantastic achievement and great performance. See you at Anfield soon.

The Wycombe-born man was awarded a prize money of $1,674,000 for winning the competition so there is no doubt he can afford the best seat in the house the next time he visits Anfield. 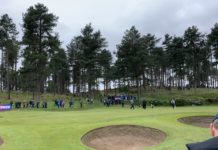 WHERE ARE THEY NOW: Jürgen Klopp’s first Liverpool XI