Following the 7-0 thrashing of Crystal Palace, Liverpool’s Premier League form has seen them fall from the top of the league to sixth.

Now 19 points behind league leaders Manchester City, the reigning Champions have won only two of their last eleven matches in the EPL.

Meanwhile, their 68 unbeaten home record was ended following a 1-0 defeat to Burnley.

That run has also seen local rivals Everton win at the stadium for the first time since 1999 after goals from Richarlison and Gylfi Sigurðsson sealed a 2-0 away win.

Saturday’s defeat now means that Liverpool have lost four league games in a row for only the second time in Premier League history.

24 – Everton picked up their first win over Liverpool in 24 meetings in all competitions (D12 L11) – ending what was Liverpool’s longest ever unbeaten run against a single opponent. Finally. pic.twitter.com/fpEqMwX5Ki

This begs the question, what is the worst run of form in Liverpool’s Premier League history?

1992/93 saw the first-ever Premier League season following the reformatting of the old Division 1. The season saw the Red’s get off to a mixed start however, coincidentally, the season took a downward turn after a 5-0 thrashing of Crystal Palace.

Following the win at Anfield, Liverpool went on to lose 2-1 to Everton at Goodison Park as a run of two wins in thirteen began.

A 5-1 defeat to Coventry was the most notable of the results as Graeme Souness’ side lost five out of six.

However, despite going on such a poor run of form the side managed to get their season back on track by winning 7 of their last 12 to finish sixth.

The very next season Liverpool started the season in flying form. The first three games of the campaign saw three wins including a 5-0 thumping of Swindon Town.

However, this was swiftly followed by one win in seven. This run included five defeats as well as failing to score for five games in a row.

For the second year in a row, they lost to both Coventry and local rivals Everton. This time the Red’s turned their form around after a 2-1 home win against Oldham.

After an upturn in form, the season eventually dwindled out with the Anfield side eventually finishing 8th.

Fast forward almost 20 years and club legend Kenny Dalglish was back in charge of Liverpool. After a steady start to the campaign, the Scotsman’s side took a downturn following a 2-1 defeat at Old Trafford.

After losing to Manchester United, Liverpool went on a run which saw them lose six and win one out seven league games.

A Steven Gerrard hat-trick sealed a 3-0 win over Everton in a run that only saw the side get 0.42 points per game.

Eventually, the Red’s would get their season back on track after a 3-2 win against the eventually relegated Blackburn Rovers.

Just months later Brendan Rodgers was in charge of Liverpool and his first few games in charge didn’t go as planned for the Northern Irishman.

His side went to West Brom on the opening day of the Premier League season and suffered a 3-0 loss.

Rodger’s didn’t win any of his opening five league games. During that time they suffered defeats to both Arsenal and Man United.

Eventually, Liverpool got their first win of the season over Norwich. Unfortunately, their start to the campaign was a sign of what was to come.

That year the Red’s finished seventh and only got as high as sixth for one week during the campaign.

The Gérard Houllier era was undoubtedly a success for Liverpool Football Club.

During his time in charge, the club won multiple trophies such as the League Cup and UEFA Cup. Meanwhile, youth players such as Michael Owen, Jamie Carragher and Steven Gerrard broke through to the first team.

Towards the end of his era, Liverpool had their worst run of form in the Premier League era.

After winning nine of their opening twelve league games Liverpool made a fantastic start to the 2002/3 season.

Sitting top of the league on matchday 13 the Red’s travelled to Middlesbrough. A goal from Gareth Southgate meant the home side dealt Houllier’s side their first league defeat.

The result was followed by a 0-0 draw at home to Sunderland. The Red’s then lost four Premier League games in a row for the first time ever.

Liverpool wouldn’t win for eleven games and accumulated 0.16 points per game.  Eventually, they dropped from first to seventh and finished the season in fifth place. 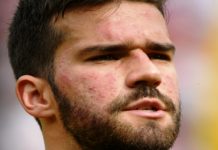