As the gorilla’s thunderous journey came across a significant stumble, the walk continued to the Mecca. The Mecca of sport. The Mecca of glory. The Garden with a history of redemption and that is exactly what Darren Till achieved last November.

With his place in the sport at stake, Till embraced his inner gorilla and deterred the Mexican blood in front of him, as he simultaneously dodged a reflective image.

The most dangerous asset Kelvin Gastelum holds is his power, but the Team Kaobon fighter did well to evade anything significant his counterpart threw his way, whilst landing the harder strikes.

The Englishman was coming back from his first two professional career losses. The first being a submission loss to then champion Tyron Woodley in September 2018 and then a devastating knockout loss to Jorge Masvidal in March last year. The loss in Dallas was disappointing, but the one in London was heartbreaking.

He lost his inner invincibility when his unconscious body lay inside the O2 Arena, as his Cuban counterpart rallied in the satisfaction of silencing the home crowd. Many expected Till to be successful in the capital and charge once more towards the welterweight title, but the path changed.

One thing that was never in doubt however is the huge following he still carries. Reaction to his victory proves he still has the star power, perhaps even more after fighting as the strong underdog, but he has never been afraid of the biggest challenge.

His confidence comes within and is very typical of his surroundings. Combat has forever been ingrained in Liverpudlian society, starting in the 1930’s with Nelson Tarleton when the city had a British champion after he defeated Johnny Cuthbert in October 1931 at Anfield Stadium.

Tarleton, despite only having one lung, captured the imagination of the people; motivating them through a tough period in history. Since Tarleton, Liverpool have had a flood of world class combat sport talent from John Conteh to Tony Bellew.

But now, Darren Till is the figurehead for the city and is the reward for the foundations set years before. The first wave of Team Kaobon fighters in 2007 inspired many, with Terry Etim being the biggest influence on a young Till.

As a teenager, Etim took him for private lessons before he started full time at Team Kaobon.

The inspiration Till found through Etim still lives on with the former UFC lightweight still regularly featuring in his corner. As Etim did, Till’s career will inspire the next generation.

The fight with Gastelum is the exact reason he will continue to inspire. 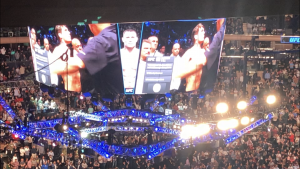 Unafraid to take the largest challenge possible at any time which can resonate to people in any form of life.

The ability to take a risk with failure high. That sort of self-belief motivates and attracts fans to religiously follow his every move.

The Neil Diamond classic in the ‘Big Apple’ reminisced prior feelings and reignited his initial spark and mystique that carried him to eventing in his hometown in just his fifth UFC appearance.

Back to the days when his playful execution of Bojan Velickovic thrilled masses and his contrasting vicious destruction of veteran Cowboy Cerrone poured him onto Dana White and the community’s radar.

Ready as ever on the trail to establishing himself as one of, if not, the most successful and established fighters in Liverpudlian history.