We were honours even at Prenton Park as Tranmere play out a goalless draw with Bristol Rovers in Sky Bet League One.

Rovers boss Micky Mellon rued defensive insecurities as Tranmere fell to promotion-chasing Portsmouth, however, it will opportunities at the other end of the pitch which will cause the Scotsman nightmares.

Plenty created, zero taken, but a resolute defensive performance will give the Rovers boss optimism for the coming weeks on Tranmere’s quest for League survival.

Saturday’s 2-0 defeat carried on a nine-game winless run, which has condemned Mellon’s side further into a League One relegation dogfight.

Much like the hosts, Bristol Rovers have somewhat found themselves in a precarious position in the League One standings as well and now with no win in 12, Ben Garner’s Gas are really struggling.

That being said, it was the visitors who started the brighter. Jayden Mitchell-Lawson was given far too much time on the left, as he fired wide before Jonson Clarke-Harris’ speculative left-footed effort sailed over.

Defensive woes have cost Tranmere in recent weeks – most notably when Sean Raggett ghosted in unmarked to open the scoring at the weekend – and after three set-pieces the opening 10 minutes, the Gas were knocking on the Rovers door. George Ray came to the Super Whites’ rescue to clear off the line after a free-kick from the left had Davies beaten.

Blustery conditions on a bitterly cold night in Birkenhead meant that neither side could find some early rhythm, however, it was the visitors dominated the opening exchanges and should have been ahead on 17 minutes. The Tranmere defence pushed up, but someone forgot to tell Manny Monthe, as Clark-Harris was played though. The big centre-half managed to atone for his error as he pushed the striker onto his unfavoured left foot and the attack fizzled out.

In an end-to-end contest, it was then the hosts’ turn to build up some momentum. Excellent wing play by Corey Blackett-Taylor on the left opened some space, his pin-point cross fell perfectly onto the boot of Kieron Morris, whose volley was blocked.

Injuries have stumped Tranmere’s progression over recent weeks and Mellon’s injury headache got even worse just inside the half-hour when defender Ray was added to an ever-growing list of bed-ridden players.

Nonetheless, Rovers started to assert their dominance onto the game. Morris’ free-kick never looked as if it was going to trouble Jamal Blackman before Blackett-Taylor’s fizzing cross was crying out for a non-existent final touch, as the ball flashed across the face of the goal.

As the game reached the dying embers of the first-half, Tranmere continued to look the side most likely to make the breakthrough. Outstanding work in the air by Cook found January signing James Vaughan on the edge of the box, but the forward was unable to get his shot away.

When a club is on a bad run of form, just one individual moment of brilliance is needed to spur their fellow man into life. A strong start to the second period from the hosts saw Morris drive a fierce strike into the legs of former Chelsea keeper Blackman.

For large parts of the first 45, Tranmere were in the ascendency and it didn’t look as if the roles were going to change after the interval. An exceptionally weighted throughball from Luke McCullough set Vaughan on his way. The striker then had time to pick his head up and find Cook at the back post, but the striker was unable to direct his acrobatic effort on target.

Mellon heaped praise on the Prenton Park faithful on Saturday, claiming that the Tranmere supporters were “magic” throughout their defeat to Kenny Jackett’s side and the fans showed their faith in the Rovers boss by bellowing “Micky Mellon’s Super White army” on the hour mark.

Despite controlling much of the half, Tranmere had to put aside their defensive struggles as Bristol pushed forward. However, Davies happily obliged when Ollie Clark and Luke Leahy’s mediocre efforts rolled into the arms of the Rovers captain.

After spending much of the middle third of the game pegged back into their own half, the Gas finally started to show what they could offer. The ball fell nicely for Ed Upson on the edge of the 18-yard area, and the Tranmere players could only stand and watch the midfielder’s curling effort ricochet off the bar.

There was time for one final chance, though. Clark-Harris steamed through on goal, but the former Rotherham striker wasn’t able to direct his low effort inside the post. 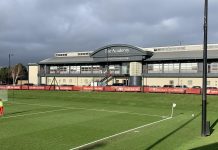 Van Dijk falls short to Messi in the Ballon d’Or