Wimbledon has been cancelled for the first time since World War Two due to the Covid-19 outbreak.

The announcement means there will now be no professional tennis anywhere in the world until at least July 13th, with the entire grass-court season now abandoned.

The All England Club made the decision to call off the oldest tennis tournament in the world following the postponement of several major summer sporting events, including the Tokyo Olympics and Euro 2020.

Liverpool’s tennis brothers Neal and Ken Skupski were both expected to feature in the men’s doubles tournament as they hold ATP doubles rankings of 29th and 51st, respectively.

The pair had partnered each other at The Championships until last year’s event when Neal teamed up with Jamie Murray, brother of three-time Grand Slam tournament winner Andy.

However, it was older brother Ken who progressed further in the competition, reaching the second round with his partner Australian John-Patrick Smith.

30-year-old Neal has continued to play alongside Jamie Murray this year, as the all-British pair were knocked out in both the Open 13 in Marseille and the Dubai Duty Free Championships in February.

Ken, 36, on the other hand, has formed a new partnership with Mexican Santiago Gonzalez and reached the quarter-finals of the Australian Open doubles in January.

He tweeted: “Gutted Wimbledon isn’t playing an April Fool on us all right now!”

Gutted @Wimbledon isn’t playing an April Fool on us all right now! ☹️ 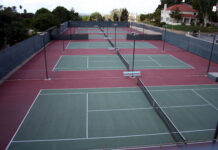 Liverpool’s Skupski and Murray miss out on ATP Finals