Liverpool have all but completed the signing of Championship centre back, Ben Davies from Preston North End, but will he prove his worth amid the Reds’ injury crisis in 2021?

The 25-year-old completed his medical at the Merseyside club this morning and the final touches to the £2 million deal are currently being completed.

Davies was being monitored by a number of clubs, including Celtic and local Preston rivals, Burnley, but the Englishman has gotten his big break with the Premier League champions.

Davies joined the Preston setup in 2007 from his local Furness Rovers side, aged just 11, but only broke into the first team over the last 3 years.

The Barrow-in-Furness local was subject to a number of loan spells since his Preston debut in 2013, picking up game time for Liverpool’s neighbouring clubs Tranmere and Southport, as well as stints at York City, Newport County and Fleetwood Town.

With 129 Championship appearances and a 2019 player of the year award, Davies looks set to bolster the weakened Liverpool backline.

A natural left footer and comfortable with the ball at his feet, the central defender suits the Reds’ needs perfectly such a challenging time.

On top of this, Davies is guaranteed to last 90 minutes of football, with regular starts for Preston throughout the 2020/21 season so far.

Scousers will pin their hopes on Fabinho forming a strong duo with Premier League’s newest addition.

Davies’ will certainly be excited to get going, but channelling that excitement will be the  first and biggest test of his career so far.

Just said this to a mate – imagine what Ben Davies is thinking right now. His phone going absolutely mad. On the motorway tonight to a hotel for a medical tomorrow at Liverpool. He's been at York, Fleetwood, Southport. Imagine the feeling! Go on lad. Smash it. 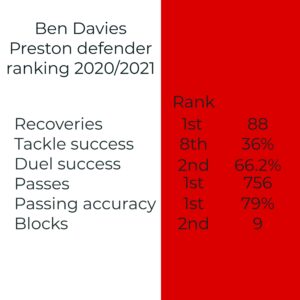 City of Liverpool Gymnastics Club to participate at Spooky Spectacular

Liverpool vs Atletico Madrid: A year on from the “Biological Bomb”

Thiem and Tsitsipas through to the ATP Finals semi-finals

Meet upCYCLE – the charity getting BAME youth on bikes