Skelmersdale United earned their eighth away win of the season with a 2-1 victory over a resilient AFC Liverpool.

Paul McNally’s men started the game brightly, showing all the signs of a team who are unbeaten since September.

Michael Howard was brought down just outside the box in the first minute of the game, and it took an excellent save by Jack McGovern from the resulting free kick to prevent Skelmersdale taking an early lead.

The Blueboys’ confidence was clear as Howard himself then tested McGovern with a long-range half-volley, which was tipped over the bar.

The Non-League Reds came into the game off back-to-back wins, and clean sheets, but struggled to deal with the slick build-up play of the visitors early on.

However, the hosts weathered the storm and begin to create chances of their own with Ben Barnes being forced to make a sharp double save. 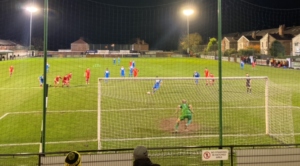 AFC Liverpool, 15th place in the league, continued to grow into the game but were dealt a killer blow on half-time as Skelmersdale were awarded a penalty.

Abdul Djalo’s close-range shot was deemed to have been blocked by an arm, and Howard converted from the spot to send his team in 1-0 up at the break.

Spurred on by their aggrieved supporters, the hosts started the second half positively.

However, their momentum was soon thwarted by a second Skelmersdale goal.

After a well-worked team move Djalo cut inside from the right-hand flank, jinked past two Liverpool defenders, before smashing a precise shot into the top-left corner.

The league leaders grew in confidence off the back of this and might have felt they should have been awarded at least one more penalty after challenges on Djalo, and Tom Croughan respectively.

However, it was AFC Liverpool who struck next after a brilliant bit of individual skill saw Kyle Schorah get his 13th goal of the season.

Now it was the turn of McNally’s side to weather the storm as the home side pushed on in search of an equaliser, with 20 minutes remaining.

The visitors were confined to their own half for much of the closing stages but stood firm to extend their unbeaten run to 12 games.

Skelmersdale will hope they can keep this run going when they host Vauxhall Motors on Saturday (3pm kick-off) and, in doing so, remain top of the league.

Jurgen Klopp calls for consistency ahead of Liverpool trip to Wolves

Widnes back to winning ways